Blog - Latest News
You are here: Home1 / Ballet Lesson 1 of 7: Holding Your Arms in 5th Position 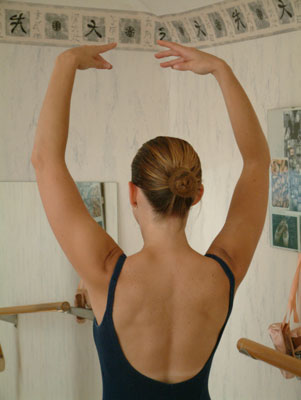 The diagram at the left shows the Fifth position or Cinquième of the arms en haut. Fifth position is important when learning ballet as it provides a basis for many other arm movements. This involves lifting the arms above the head and having them form a soft oval shape in the air referred to as en courenne or being crown like, the palms facing down toward the top of the head, or away from the audience, and the finger tips not touching. There is generally one important point to remember with any arm position but especially with fifth and that is to take care that the shoulders remain down. Hunching of the shoulders upsets the arms during fifth position, and ruins the movement. The shoulders are one of the main faults of the dancer pictured in the photograph, as her shoulder blades are too flat.

Flat shoulder blades during Cinquième make the position seem ill practiced and careless. It is important that although the shoulders need to appear to the audience to be soft and refined, the dancer must be conscious of holding them in a way that feels squared, as this will add definition and make them appear sharp. The key to holding the whole of the arms, including the shoulder blades in their correct position is to ensure that the neck is gracefully elongated. The top half of the body including the shoulders will then fall into place.

When the arms are in fifth position, the entire arm should look elongated and graceful. This means that the whole of the arms from the shoulders to the finger tips need to appear as though they are all working together toward the final position. No one area should dominate the others and each has an equal role in forming the final crown. This is achieved through dedicating time to the weaker parts of the arms, hands and shoulders to ensure that they have an equal ability to achieve the final position.

In order to elongate the wrists it is important that the muscles within the wrist are strong and flexible. Often the majority of attention is dedicated to the muscles within the dancer’s legs, with those in the arms being neglected. The mark of a good ballerina is however to have an evenly toned body, with no single part dominating. Further to this the fingers should be pointed. When learning the correct positioning for the arms in fifth position many dancers find it useful to imagine a piece of string running the full length of the arm, to the finger tips, and this piece of string being pulled thus extending the entire arm.

Fifth position is often used as the mark of a dancer’s ability. When the arms are raised in the air above the head, there is no way to hide any faults or imperfections from the audience. For this reason fifth position is the one in which the dancer feels the most vulnerable. Therefore care should be taken to ensure that all elements to this position are being performed correctly.

You can find out more in The Complete Ballet Bible Package

Want to join the discussion?
Feel free to contribute!