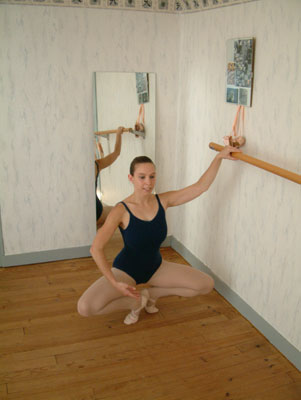 As outlined before for fifth position, flexibility and strength needs to be developed before this movement is able to be performed correctly. The correct performance of plie en Cinquième involves the dancer positioning themselves at the barre. The most important element of a plie to remember especially in fourth and fifth position is to let both knees move out equally, that is to ensure that the back knee does not roll forward, and to distribute the weight easily over the centre of the body, not allowing too much weight to move to either the front leg, or the back leg.

In order to keep the body straight throughout, a clever idea is to imagine a string running down the length of the body, as the top half of the body lowers to move into the plie, the string is trying to pull the body up higher. This helps to keep the spine tall and straight and helps to eliminate the rolling back, or in this case forward of the pelvic bone, and therefore upsetting the line of the derriere.

Like stated in the section on Plie en Premiere, it is important that the dancer goes no further with a Plie than he or she is physically able. This need is magnified with the Plie en Cinquième, as if performed to a level higher than the body is able, the bodies balance may be upset enough for the dancer to fall over, and whilst falling over is something which is not at all bad in rehearsal, in performance it can upset the performer and any others who are on stage. So it is important to understand the bodies’ limitations.

You can find out more in The Complete Ballet Bible Package

Want to join the discussion?
Feel free to contribute!